“Ah the chance to just slip away from the earlier part of the evening was bliss. I walked into what appeared to be a smaller club lounge, slightly moody in feel, with an interior full of armchairs and sofas. I happily parked myself quietly away in the corner, thinking that I could sit here undisturbed for a little while and just enjoy the remainder of the delicious wine in my glass. I allowed myself to sit back and just mellow, it was rather decadent to have this time and I enjoyed the pleasure of it. After what seemed like a good few minutes I heard a little noise at the door but decided to lean further back into the shadows hoping nobody had noticed my absence or my presence in this room and therefore allow me to linger here a little while longer.  It was just too nice having some time to myself. But hmm, interesting … my eyes were rather drawn to the  visitor I have to say. A rather tall, attractive looking younger man, maybe in his mid 20s, opened the door rather dubiously and looked around the room. I realized I had noticed him earlier in the bar, there was something about him that you couldn’t help but notice. Thankfully I was just enough out of the light that he hadn’t noticed me tucked away in the corner, which gave me the perfect opportunity to take a much better look at him.

I wasn’t sure why but he was hesitating a little at the doorway seeming to just take in the room, but within moments, he had moved further in bringing with him another woman. She was certainly older than him, attractively dressed, but I wasn’t sure if I had met her before. It’s possible they were both involved in the same event as myself earlier. Maybe they needed some quiet time too. But I didn’t expect the moment the door shut he immediately pulled her close and leaning her body against the wall by the light he started to caress her gently but with a definite desire in his moves.  His strong body had her firmly pressed against the wall. It all seemed so unexpected but I kept watching not thinking I was doing anything wrong, after all I was in the room first whether unnoticed or not and I wasn’t ready to leave my quiet solace, but equally my interest was aroused in what I was seeing, it was somewhat mesmerizing, watching these two from across the room.

They continued to caress and kiss each other without moving from the wall, with each moment becoming more and more passionate. I stayed just watching and enjoying seeing how she was responding to his interest. His hands began moving more fluidly up her body, taking in her shape through her clothing, all the time his lips constantly on hers, there was no doubt he was wanting to devour her. I was becoming quite envious of all this pleasure she was having and I wanted to feel some of the same enjoyment she was certainly experiencing.

My eyes stayed perfectly still, absorbing their naughty moments. Somehow looking at him he seemed even more delicious than I first thought when he came in the room. Her hands now in his hair, it was a little more tousled than before, clothing become a little more ruffled, his body pressing against hers, I was feeling more aroused as I imagined just how good that felt. My wine adding to the idea of being involved with them, I watched her face where I could, it said it all to me, these were two individuals grabbing a few moments of pleasure, it felt raw and naughty, whether this was a planned encounter or not.

But I was still here in the shadows just watching and observing their moves. I realized they were too involved in each other for me to now move, and somehow, I really didn’t have any desire to. Afterall, they hadn’t taken the time to know that someone else was here and I felt I was involved in their moment too, I wanted to be part of this, my body was wanting to see and feel their involvement and I felt myself twitching with anticipation and desire.

Not loosing eye contact he moved with her to a smaller club sofa in the room and began to allow his hand to tease at her clothes, taking the chance to feel more of her body beneath. Hand riding up her thigh I knew he was wanting to feel her excitement, her body moving to allow her skirt to ride up more easily. I started to feel damp with such excitement, I was captivated by their actions and allowed my hand to move onto my body and feel some pleasure stroking myself through my clothes.

His jacket off and shirt undone, the blond woman started to ease him out of his trousers and allow his cock to spring out. Ah he was fully aroused and he looked perfection ready to be taken …  I just couldn’t take my eyes off him. This was such a delicious sight and I was loosing sense of where I was and what I was doing watching them. But my mind and body were becoming absorbed in it all. Moments later she knelt before him and began tasting him in her mouth, she had lost all sense of propriety and was wantonly pleasuring him so opening. But I did have a sudden moment of dread. What if they could see me and I had said nothing other than just watch such an intimate act. I consciously tried to quiet my breathing even more so it was slow and still, but my body all the time building with such excitement. I wanted him to come to me and feel me too, to see how wet I was becoming watching him enjoying this other woman, let me kneel before him and take him in my mouth too. My hand now had found itself in my pants easing past their dampness to feel inside. Ah I couldn’t believe what I was doing, but the moment was so erotic and my mind constantly on their pleasure.

He knew what he wanted and maneuvered himself down bringing her body to him. I watched her face with ecstasy as he entered her deep with her legs spread either side of him. She knew what she wanted and was physically feeling every inch of him. Ah my heart was racing, my body aching even more as I watched them fuck each other across the room, just in front of me. This was raw, erotic and intoxicating. My fingers now were deep inside me, as I grew more swollen, their noises taking over the quiet of the room, her desire charged she exploded on him, I nearly gasped and quickly caught my sound, but it was such an impulsive action. But just at that second she looked up and across at where I was sat. Ah please no! Had she seen me? But then she looked straight at me and I believe just managed to catch my gaze from the shadows. Was that I knowing look I could see on her face, could she really see me, what should I say? Nothing was said but I felt her look and even smile directly at me. Something in that look told me she knew. She knew I was there, and I could see, but just as I had kept quiet so was she, and together we were going to keep our secret.

Removing her glance from me she got up and resumed her posture, adjusting her clothing and hair. They turned together, embraced and kissed each other again before leaving the room paying no more attention to the shadows in the corner. Ah finally I felt I could breath again and let out an almighty gasp, my heart almost jumping from my chest. Somehow I had been involved, we both knew, but who they were I didn’t know. They were just a pair of naughty lovers having their moment of pleasure. “ 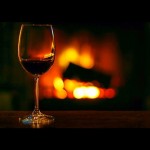 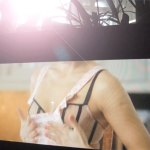 We’ve done it again… more in the can! 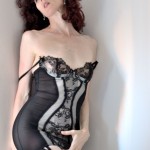 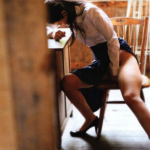